Breakfast! That's a wonderful way to start of your day if you can manage it. And I did on the second day here. Before we came to Guatemala we sort of had an itinerary of what was going to be done. It's always emphasized by the leaders that we've got to be flexible though, because once we get to the village plans can change at any point.

I had "signed up" for construction of a wall by the church structure. When we got to Los Chilitos though, that was no longer a feasible project. The construction project was going to be in the other village we were serving: "The 46".1 Instead of a wall we'd be putting the roof on top of a church structure. But before that could be done supplies had to be gathered. Those lucky few chosen for that task were up and out 6 a.m. Poor guys. After grabbing supplies, they headed off to The 46 to start on the roof.

The rest of the "construction crew" and everyone else, were taken to Los Chilitos and helped with the medical clinic and Kids Fest 2 activities, that were already planned. After a very bumpy bus ride up we got out and I started walking around while other people did useful things. I noticed some pigs and goats on the hill overlooking the church property. The pigs I saw here were the skinniest pigs I had ever seen in the history of ever. Someone explained that this was actually a sign of things improving in the village. This meant that they could afford to buy animals to raise and, I can only assume, eat.

I didn't occur to me to ask about the purpose as I was still focused on how decrepit and malnourished these pigs looked. I mean, standard operating procedure for a pig is "to be fat". If pigs were to give out resumes to prospective owners under goals they'd have: "Getting fat. By any means necessary". Pigs, eat almost anything. But this thing was gaunt. Just look at it: 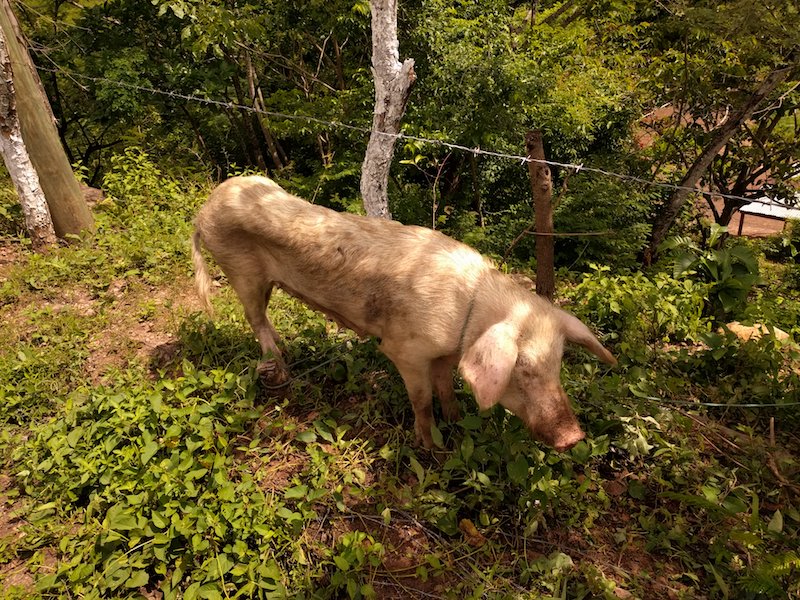 On somewhat related note, I also saw malnourished goats. Goats literally eat anything. Seriously. When I was a kid my grandfather brought a goat home once. I took it upon myself to feed the goat by hand every now and then, and this thing ate every kind of leaf I gave it. I started wondering if there was anything this goat wouldn't eat. Being the inquisitive type, I took some mango leaves, rolled up some of its poop pellets and fed 'em right to it. And you know what? It ate them. Pellets and all.3 But I digress.

After leaving the bus we started to make our way up to the school where Kids Fest would take place. Some of the kids came out to greet the team and ham it up for pictures. They were really cute. 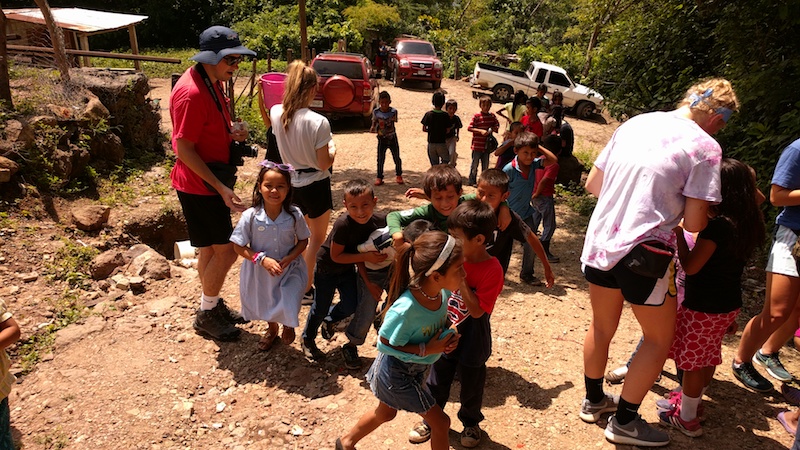 This particular band of brothers couldn't wait to be in front of the camera.

Eventually, most of the kids were corralled into the hallway of the school and the Kids Fest Team began by reading a bible story, which was then translated (into Spanish) for the children by the translators who accompanied us. 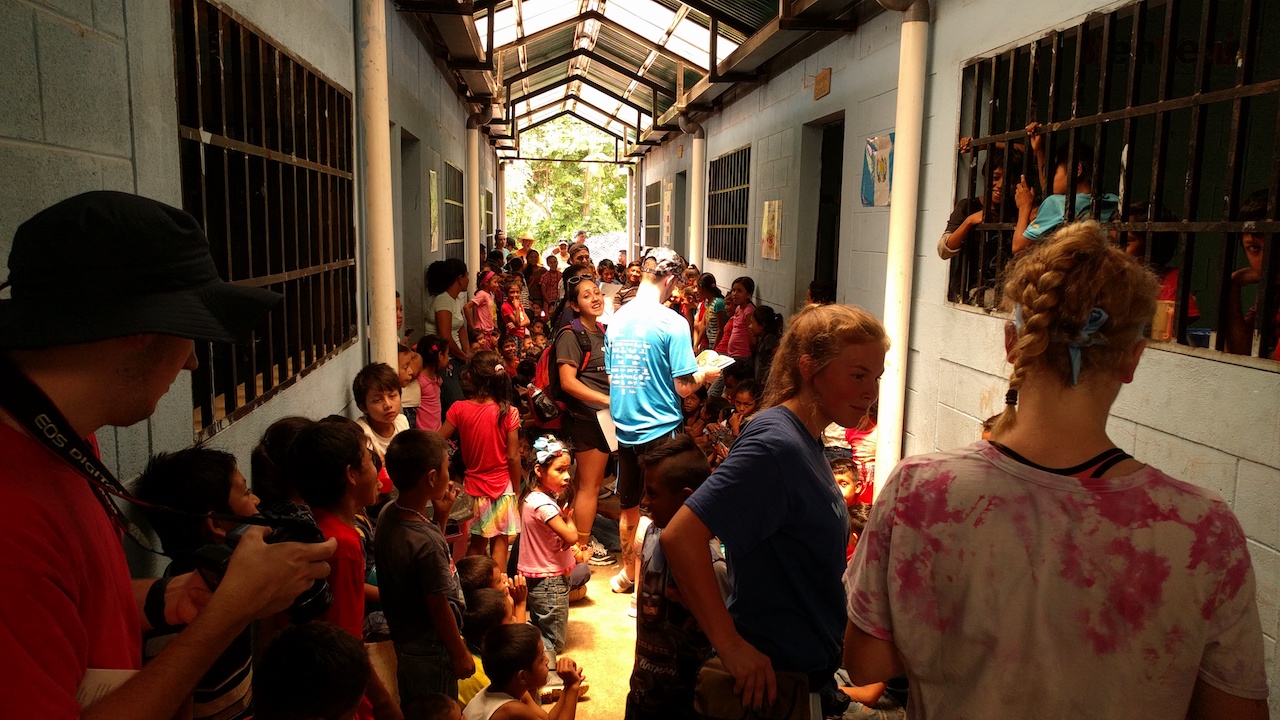 We did a few other activities with the kids in their classrooms, and then broke for lunch. When we returned I was conscripted into the prayer team. At this point you might be wondering, What's a prayer team doing at a clinic? Well, I'm glad you asked. The folks in Los Chilitos are poor, sure (see pig above). And, while it's easy to focus on their material poverty,4 that's not the point of a mission trip.

The goal was not to feed the body—though the church does give to provide school lunches for the children—but to feed the spirit. We went hoping, and praying, to get opportunities to introduce these people to Christ. To open their eyes to a relationship with a God who cares about them, loves them, and wishes to see them living a life free of sin. This is a departure from the empty rituals of religion which do nothing to draw us closer to God or please him.

The clinic provided another avenue for us to show this. People came with medical needs, and we had nurses and nurse practitioners who were able to do whatever it is that nurses and nurse practitioners do. (I'm fairly certain it involved medicine and the like.) But once they left the clinic, there was also someone present to ask if they had anything they wanted/needed prayer for. Having addressed the physical body, we also tried to address the spiritual needs, by praying for them, and pointing them (back) to Jesus. To me, it seemed very appreciated and needed.

Shortly before the clinic ended we were called over to the high school to help out with The Uprising 5 activities. After that we attended another church service and, I really wish I had recorded it. To say that God's presence could be felt in that place is an understatement.

Following this, most of the team went back to the hotel to clean up and eat, but a few of us hung around for a "workshop". The original pitch is that we were asked to teach them how to be missionaries. Different individuals were tasked with preparing something in that vein. I chose to use specific moments from the early Acts church for guidance on how to deal with various things those early missionaries encountered; things all missionaries likely still encounter today.

I didn't use any of that though. Ultimately, I didn't prepare well enough to bring that message so instead I just wung it. In the end it was really just a few of us sharing our stories of how God had changed our lives, leading us down the path to where we were able to be doing missions in Guatemala. Maybe I'll post what I planned to say in my next blog.

At the end of experience we prayed, left our hosts, drove back to our hotel in Cuilapa, grabbed some food then called it a night.

Also, check out this cute baby. 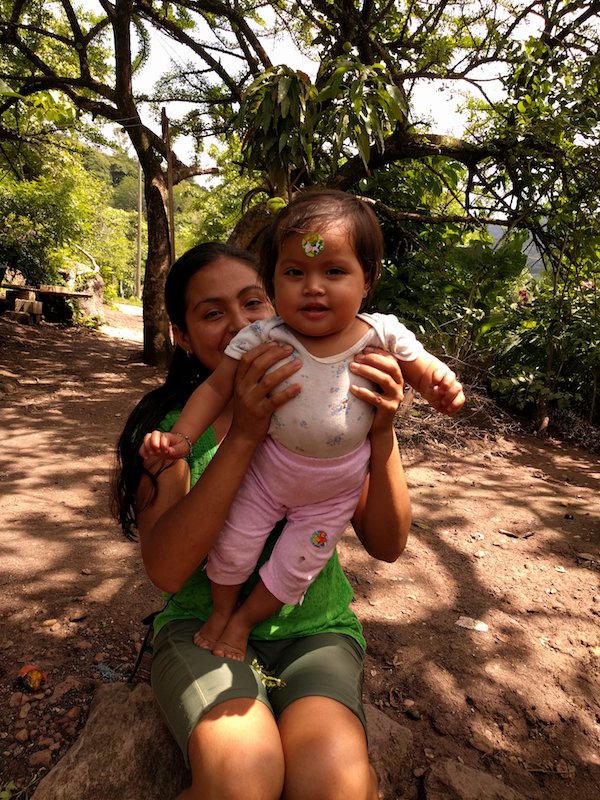 Interesting name for a village, Amirite?

Kids Fest is essentially our church's term for "Group activities designed to engage kids and introduce them to the gospel in a, hopefully fun, but also relevant way."

Hands down; this is my favorite goat story. I'm glad I got to share it with you.

It's oh so easy to focus on that. Look how long I spent talking about a starving pig.

The Uprising is the churches teen ministry. They have an age range but I couldn't tell you what it is. It's for the teens to the college aged kids.